So this is now my fourth post about this year's Disney Princess Half Marathon, and it's going to be the last (at least recapping the weekend).  I wish it could go on forever, but alas, all magical things must come to an end according to Fairy Godmother.  So here we go - the half marathon, the final race between me and completing Glass Slipper Challenge number 4 (and coincidentally, the final Glass Slipper Challenge because next year it's going to change to the the Fairy Tale Challenge). 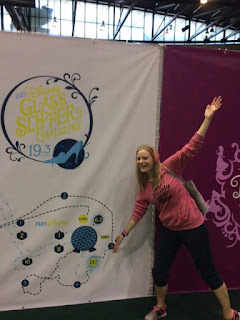 What's even crazier to think about is that, as I'm posting this, I'm already registered for Princess 2018 thanks to past participant early registration!  I know, crazy right?! Crazy amazing! Anyway, back to 2017.  This was my third early morning in a row because this year I tacked on the 5k.  That's probably the hardest part of these Disney races.  I got my peanut butter bagel together and, a little bleary-eyed, we made our way to the buses (in case you haven't done Disney races before, they do allow spectators to ride the bus). 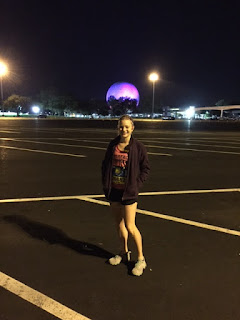 After a short ride, we were back at the same spot - the Epcot parking lot one more time - and I just couldn't believe all the people.  I've done this so many years and am constantly amazed by the masses and masses of people, which you have to factor into your logistical timing.  The starting area for the half marathon is in a different place than the 5k and 10k.  Once the buses drop you off, you have a good 20 minute walk even after you clear security and make your way to the entertainment area.  I made the mistake of waiting there too long one year and ended up running into my corral just in time.  No one needs that pressure, so I just went there directly this time.
Then once you get to the corral area, there are corrals for days!  They go down the street and then wrap back around so that you basically have two rows of corrals.  Not complaining at all about my placement for this one, but it was probably another near 10 minute walk up toward the start to get situated.  Apparently there was a lot of traffic getting in and a lot of people running late, so they delayed the start of the race.  Even though I was ready to get rolling, I appreciate runDisney trying to ensure that everyone has a good experience. 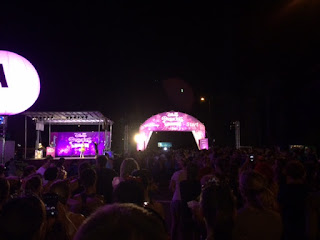 Then, it was finally time to get started.  They announced the beginning of the corral, we started moving, and then we were stopped.  I thought it was a glitch, but I've heard others say that they staggered the corrals (like they did for the 5k and 10k) to help with the congestion.  The delay wasn't long though, and then we were off!  Once again, I didn't take a lot (okay, any) pictures along the way or stop for characters.  Even beginning in the early corrals, the lines are long to get these photo ops! Some day I may have to try it .... maybe. 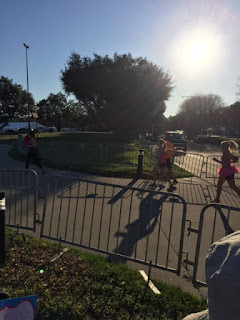 We traveled from Epcot up to the Magic Kingdom (my favorite part).  There's just something really special about coming in and running up Main Street, then winding your way through the park.  It was so well timed having several Beauty and the Beast characters right before you ran through the castle.  That's maybe the best photo op of the race - either that or with Spaceship Earth in the background.  When you leave Magic Kingdom, you begin the long trek back to Epcot.  By this time, the sun was out and I was so glad I brought along my sunglasses! 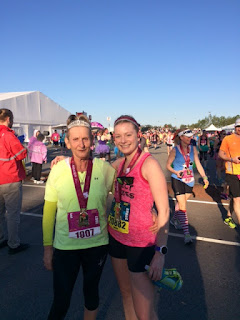 I even met a fellow Perfect Princess along the way!  It was a beautiful day - great day for a run.  I didn't have any kind of spectacular time, but I trucked along, enjoyed the scenery and just BEING in Disney, and had some fun conversations along the way with other runners.  We talked about running, Disney, and all of the recent runDisney changes.  And then before I knew it, it was over! I collected my medals and my snacks and headed back towards the bus to get a much needed shower and a nap! 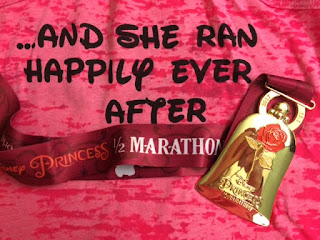 I have to admit that I'm still not happy with this half marathon medal. I realize that runDisney has been changing a lot of things, including medal designs.  I get that. I just don't like this one.  It feels plain and has a distinct lack of princess sparkle.  But all in all, it was a good haul! 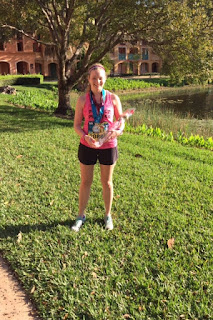 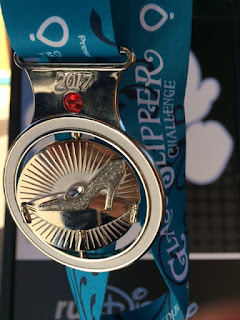 The Bottom Line:
Run This Race If: You love Disney, Princesses, dressing up to race and/or are looking for a magical and entertaining half marathon.
Course: Loop course (for the most part), on mostly paved roads with a few different surface materials when you get into the parks.
What Makes It Unique: It's Disney. And Princesses. Did I mention the Disney Princesses?
Cost: Pricey ($195 for the Half Marathon alone and $340 for the Challenge)
Website: https://www.rundisney.com/princess-half-marathon/
Would I do It Again: Already registered! This Perfect Princesses is keeping her hands on that crown!
Posted by Lindsay Loves Running at 5:15 PM