Believe it or not, this was my first runDisney 5k.  Somehow it seems very appropriate that it was the Princess Half Marathon weekend.  In case you're wondering why I have never jumped on the bandwagon before, I have to tell you that it's because up until last Fall, Disney gave our rubber "medallions" for 5k finishers.  When they converted to metal medals ... well I just had to jump onbaord! 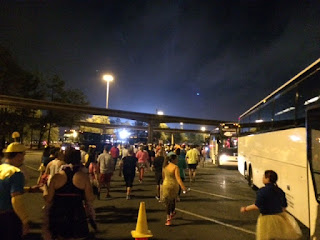 The morning started just like any other runDisney race - EARLY! Okay so this one was half an hour later than the rest, but when you have to board the bus by 4:30, it still feels pretty early.  We unloaded off the buses outside Epcot and began the trudge to the start area. 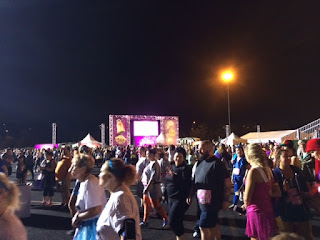 And I do say start area because its not just corrals.  For the record, this is the exact same setup as the 10k, too.  When you get there so early, there's some time to kill, so there was a stage, music, etc.  It's so great for people watching and costume spotting.  I'm not clever enough to come up with great costumes, but I so appreciate seeing everyone else's!  The weather was pretty warm and humid; definitely not complaining though and made it much more pleasant for spectators. 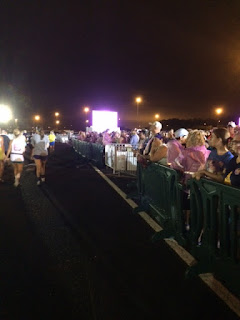 I was placed into the A corral, which meant we did this little walk down and around all the rest of the corrals.  Won't lie, it made me feel like a big deal.  To be clear, this race was not timed, it was a fun run, but they still had corrals anyway to try and contain the madness that is thousands upon thousands of princesses all moving in the same direction. 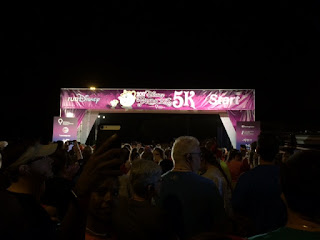 So here I was, ready to go.  The announcers seemed to be announcing the start of the corral, fireworks went off, we moved a little bit and then stopped.  I learned this later, but apparently they were also breaking the corrals up into sub groups to try to minimize congestion.  Without much delay we were off, winding our way through the parking lot on our way to Epcot. 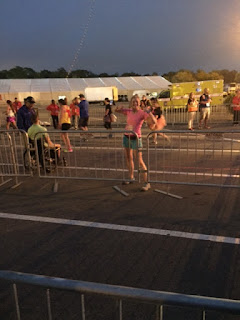 Sorry I didn't take pictures along the way, but we wound around the World Showcase, did a little jaunt around the rest of Epcot and finished back in the parking lot.  It was a little wild to finish before the sun was even up, but what was even crazier was that I didn't know how much they were spacing out the start.  I collected my medal and snacks, stretched, and walked back over to where the bus was going to take us back to the resort ..... and then we waited for probably another 30 minutes.  The whole start area had to clear before the buses could come in to pick us up. 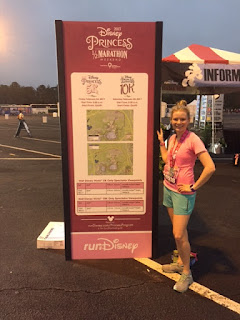 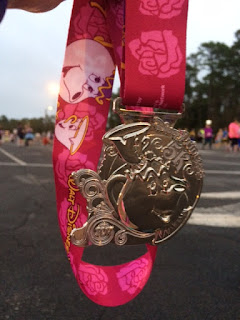 The Bottom Line:
Run This Race If: You don't mind a 5k with some extra logistical challenges (and magic) that is not timed.  Good for locals or anyone traveling in for the other races.
Course: Loop course (mostly), on mostly paved roads in parking lots, roads, and through the park.  Almost entirely pancake flat.
What Makes It Unique: Well it's Disney and super low pressure.  I also like that you get a cotton shirt instead of a tech shirt.  You get to see Epcot in all its splendor lit up with multiple characters along the way for entertainment.  They also pump up the Disney tunes pretty loud in Epcot, so you might not even need to bring  music to this one!
Cost: Pricey, $80 for the 5k alone.
Date and Time: Race starts at 5:30 AM on the Friday of Princess Marathon Weekend.
Website: https://www.rundisney.com/princess-half-marathon/
Would I do It Again: Definitely planning to sign up for next year.
Posted by Lindsay Loves Running at 6:20 PM