This is the third time I've run this race, but after a race-less January, I was so ready to get back on the race scene.  I really miss the energy and the feeling of being "out there" with an amazing community of runners.  I was looking forward to this one even more because I was going to be doing it with my running buddy, Brooke, who was going to be tackling 15k for the first time.  I've never been an official pacer, but there are few things better than pacing friends to new distances or new PRs.
I was actually really lucky Brooke was running with me because work has been beyond insane and I couldn't get to the expo.  Guys, make sure you have great running friends who will go to the expo for you when you can't (except for runDisney events because they don't let you do that - subject for another time).  They just need to have a copy of your confirmation with QR code.  The expo continues to be at the Musician's Hall of Fame and Museum downtown.  It's a nice little spot for an expo, but the parking is challenging. 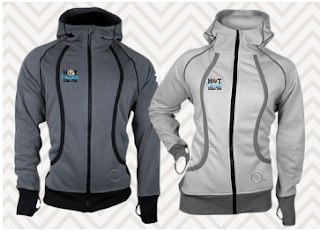 This race promotes their great swag and I'll tell you that this year they got it right.  The hooded sweatshirt/jacket is so much nicer than in previous years! Really soft cozy, true to size, and none of that overly plastic-y feel/smell of previous years.  We also registered with a code from BibRave and got free visors! Woo!  Love bonus swag! 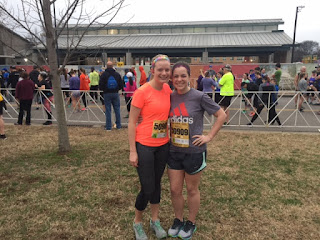 I don't know what it is, but Hot Chocolate weekend always has terrible weather.  It's usually really cold (by Southern standards).  Last year it was 15 degrees and the year before it was 20 degrees.  So we were excited when forecasts were calling for 50s and flirting with rain (this last part was a little less exciting).  Race morning came early and it was already 60 and .... WINDY.  I really didn't figure that into my outfit choice.  Like typical runners, we cursed ourselves at the beginning, sitting there shivering, but then later were super glad we didn't layer up. 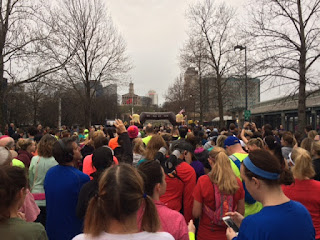 For a 7 AM start, we got parked by 6:30 and walked over.  There are corrals with time between to space runners out, but there is no one really guarding the corrals.  We were running the 15k, but 15k and 5k runners all start together at the same time.  Shortly after the national anthem, we were off! It was shortly after we started that a really light rain started and kept falling on and off for the remainder of the race (I knew I should have worn that visor).  So, I didn't take pictures during the run, but it's a nice urban course that starts at Bicentennial Park, winds its way downtown to Centennial Park, and then back.  Word to the wise, this one is hilly.  The largest hill happens within the first mile of the race, which means the 5k runs it, too; the first half of this race definitely feels harder than the back half. 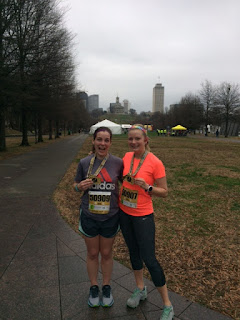 Like any Hot Chocolate race, it's well supported with Nuun stops (love this) and sugary treats along the way (I did not partake in any of these along the way).  Brooke did amazing and I am so proud of how strong she ran! This medal was definitely worth the hills and the rain - so pretty.
As if the medal wasn't enough, we had some pretty epic sugared snacks waiting for us post-race. Thousands of pounds of chocolate fondue were handed out to finishers, and we sure gobbled up our fair share!  Thankfully the rain had stopped and we could enjoy our treats and some music on the lawn.

The Bottom Line:
Run This Race If: You like a really fun race with great swag, but don't mind a challenging course to get there. And with a February date, you don't mind taking a risk on the weather.
Course: Loop course, all on closed roads.  Challenging course, with lots of hills and inclines along the way. This one is urban and gives you the chance to see Nashville in a new way.  There are several hydration/sweet stations along the way.
What Makes It Unique: Really fun atmosphere, great swag, and it's a February race (definitely not as many of these around).  Did I mention the chocolate??
Cost: Moderate, especially for what you get.
15k: early registration $64 to late registration $79
5k: early registration $34 to late registration $54
Date and Time: Saturday in early February. 7 AM start time for both the 15k and 5k.
Website: https://www.hotchocolate15k.com/nashville
Would I Do It Again: Yep, sure would. And I plan to be there again next year.  Hopefully my girl Brooke will come back to get a new 15k PR, too!
Posted by Lindsay Loves Running at 3:02 PM 3 comments: