Happy Medals Monday! Alright Disney Princess fans, we got a big reveal this morning!  RunDisney gave us ALL of the medals to be earned during the upcoming Princess Half Marathon Weekend, which will be the 9th anniversary.  Okay so here we go!
As was previously suspected and confirmed, it's going to be a Beauty and the Beast themed weekend.  With the release of the 25th anniversary animated film this year and the much-anticipated live action version, this was not a huge surprise.  What may come as a surprise is some of the BIG changes to these medals. Let's go through them!
Since Lumiere got his own challenge this year (part of the Wine and Dine Half Marathon Weekend), Cogsworth gets his own kids races and accompanying medals.  These medals are still rubber and colorful to keep the small ones safe.
Mrs. Potts and Chip take center stage on the 5k medal.  This will be the first "metal" medal for the Princess weekend since runDisney announced earlier this year that all 5k medals would move away from the rubber design.  You can really see the bright, themed ribbon on this one.
The 10k medal starts to be all about the Princess of honor this race weekend - Belle.  Not only does her silhouette, with legendary magical rose) appear on the medal, she also graces the ribbon.  While the general 10k medal style is consistent with years past, the ribbons have never featured the princess' images.
And now for the big one - the Half Marathon.  When I first saw this, I was shocked.  Typically, the half marathon medals have been subtly themed with a more general princess feel.  This one is all out Belle with the magical rose as the point of focus.  Gone are the crystals and tiaras, instead we get enamel and a new shape. 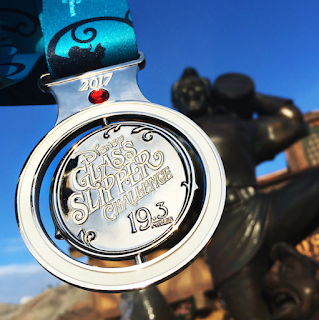 To be honest, I'm not sure what I think right now.  First reaction is that I love the 5k and 10k designs.  I'm okay with the spinning Glass Slipper Challenge medal, though find it unnecessary.  I'm really conflicted about the Half Marathon.  I loved the elegance and not overly themed design of previous years.  This is all Beauty and the Beast, no doubt about it and that unique identity is likely what runDisney was going for here.

So what do you think - do you love them, like them, hate them?
Are you running any of the 2017 Princess races?
Posted by Lindsay Loves Running at 2:03 PM

Email ThisBlogThis!Share to TwitterShare to FacebookShare to Pinterest
Labels: RunDisney