I'm back!  It's been a while (apologies), but I'm here and ready to talk New York!  It was a great weekend, but a complete whirlwind.  After getting off the plane Friday and checking into the hotel, my dad and I went straight to the expo.  We were told that it was a little crazy (meaning tons of runners) and figured we should probably knock this out as soon as possible.  So off we went to the Javits Center! 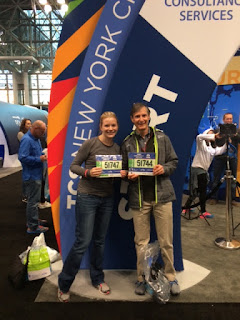 And boy was it massive!  New York is the largest marathon in the world and it was certainly the largest expo I have ever seen.  We got our bibs, picked up a few items I just couldn't live without (the requisite jacket, bar ware, etc.) and shopped around the booths (translation: scored as many free snacks/samples as possible).  The whole experience was really overwhelming and I really felt the magnitude of this race. 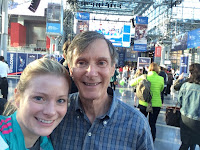 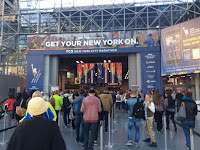 The branding of this race is just incredible as well.  Everything feels special and looks really good.  I've never done a small marathon, but this was certainly an experience.  This is also where I started to get a bit nervous and remember just how far 26.2 miles is (and how it feels - painful).  Thankfully we planned to take it pretty easy Saturday - just a little sightseeing and a dinner put on by Marathon Tours; the travel company we used for this trip (including race entry). 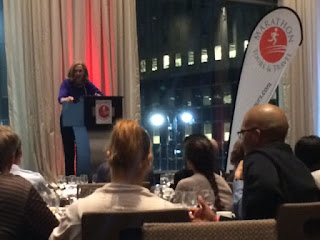 So let's fast forward to dinner Saturday night, which was at our hotel.  The dinner was fine, but do you recognize the person in this picture?  Yep, that's the legend, Kathrine Switzer and she is amazing!  Here's the short version for anyone who doesn't know her: she was the first woman to register and run the Boston Marathon (nearly 50 years ago).  It was at a time when the general public didn't believe women could/should run a marathon and the race director  tried to physically pull her off the course.  She has devoted her life to opening doors to women in sport, especially running.  And yes, she has won the New York City Marathon. 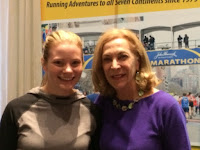 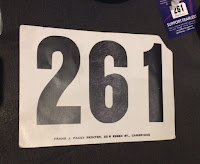 I totally had a fan girl moment when I met her (ran right up and hugged her - awkward), but she is so gracious and lovely.  And she brought her bib from her first Boston Marathon!  I got to touch it!  It's also the basis of her charity 261 Fearless.  I was so inspired leaving that dinner, which made me really want to run well the next day.  Back in the hotel room, we laid out all of our clothes, bibs, snacks, for the next day, and tried to get some sleep. 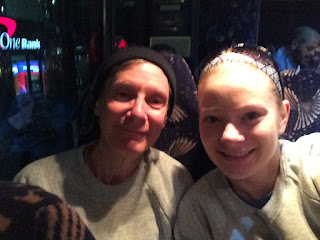 The next morning, we got up and got ready - including layering on all of our "throw away" clothes - and headed down to the bus.  Marathon Tours arranged for coach buses to take us to the start.  Normal entry gets you either bus or ferry transportation to the start.  I'm usually the girl who obsessively checks the weather, but did not check the weather marathon morning ... and it was way warmer than expected - 54 degrees to be exact!  So, we overdressed just a little for the long wait before the race. 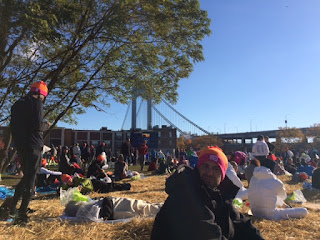 We arrived on Staten Island with thousands of other runners and had some time to find our corral, use the port-a-potties (for the record, there were not enough), and fuel up.  I couldn't believe how early we had to be there given our 10:40 AM start, but it didn't feel like we were waiting an excessively long time.  It helped that the weather was nice; I don't think the wait would have felt so manageable if it had been cold and wet.  When it was our time, we lined up in our start corral, ditched our extra clothes, and waited to hear the melodious voice of Frank Sinatra kick us off with "New York, New York." 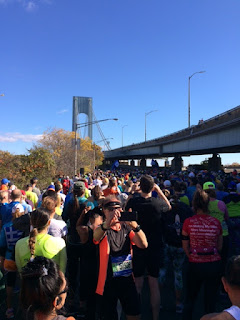 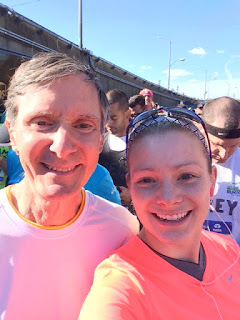 We started on the bottom level of the Verrazano Bridge - for the record, this bridge is incredibly long (about two miles, which means that it's about a mile incline followed by a mile decline).  It was an epic start to an epic race.  I didn't do a good job of taking pictures during the run - I was too busy trying to run!  It was a difficult race through all five Burroughs, which also means multiple bridges.  New Yorkers provided great support and hilarious signs.  The course was really well supported with great volunteers and plenty of aid stations and port-a-potties. 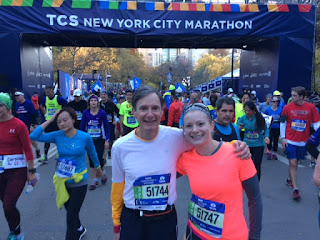 Even though it was really tough and we struggled toward the end, my dad and I finished together, hand in hand, with smiles on our faces.  It was an incredible feeling, but I was so glad to be done.  Because it was such a late start, it wasn't long before the sun was threatening to set and bring cooler weather.  When you register for the race, you can elect to either have a bag for gear check or receive a post-race poncho (nicer than it sounds).  After collecting our medals and bags of snacks, my dad headed off to collect his gear check bag and I took a different route for my poncho. 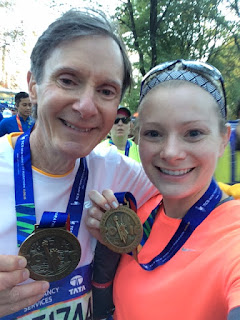 We were exhausted and sore, but had been part of something really special.  Despite the fact that both of us had struggles during our training and it wasn't a PR for either of us, we had fun and got an incredibly unique view of New York.  We took the subway back to the hotel; navigating the stairs was a little interesting, but we made it and feasted on post-race New York pizza in celebration.  This was a short trip - we were headed back home Monday afternoon - but I am so thankful to have been able to run this race and with my dad. 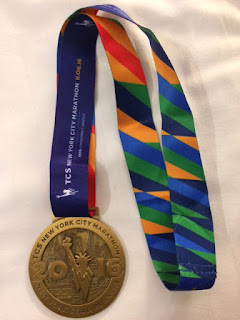 The Bottom Line:
Run This Race If: You love big marathons, especially if you're interested in the Abbott World Majors.  If you want to have an epic experience and don't mind a race that has some logistical challenges and is definitely not ripe for PRs (though not impossible).
Course: Challenging, point to point, hilly (bridges and Central Park finish), on the streets of New York.  Some turns, but the vast majority is straight.
What Makes It Unique: The setting - I mean it's New York!  I was also amazed at how many international runners there were.  It's also the largest marathon in the world with over 50,000 runners finishing every year.
Cost: Pricey.  2016 entry: New York Road Runners members $216, Non-Members $255, Non-US Residents $347, Processing Fee $11.  The larger issue is getting in.  This is a really competitive lottery and you could try for years to get in.  Of course there are ways - through NYRR, charity entries, and tour companies.  This one is commitment though.
Date and Time: First weekend in November, staggered start based on corral placement.
Website: http://www.tcsnycmarathon.org/
Would I do It Again? Maybe, but not because of the race.  I am so grateful that I had this opportunity to run it and would never take it back, but I'm not sure how many marathons I have in me (or in my dad for that matter).  I have a feeling the next will mean trying something new, but I would definitely recommend this one.
Posted by Lindsay Loves Running at 6:33 PM