When I got the last issue of Runner's World in the mail, I checked the cover and flipped right to the article that listed "America's 50 Best Running Cities."  As you may have guessed from the title of this post, Nashville doesn't make the list, and that bums me out.  There are five categories they looked at on a weighted basis:
1. Run (40%) - things like races, clubs, running stores, etc.
2. Parks (20%) - ideal places to run
3. Climate (20%) - how close the city gets to ideal running temps
4. Food (10%) - proximity to healthy food
5. Safety (10%) - how safe it is to run 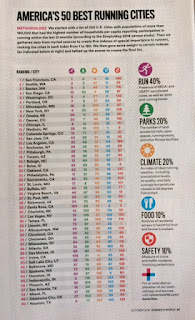 Trying to get over my immediate disappointment, I started thinking about what makes Nashville different than a place like Chicago (my hometown and ranked at number 11 on the list).  Nashville as a city is growing out of its shoes, seeing a major influx of people (especially young people), new stores and restaurants, housing builds, etc.  I cannot imagine that food or safety would take Music City off the list and if Atlanta (ranked number 38) makes it, then climate couldn't be the primary factor. 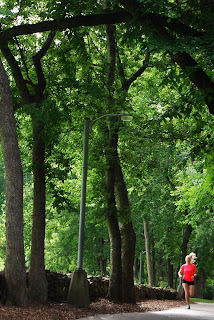 I've been impressed by the number of great places to run here too.  There are parks and a greenway system that traverses the entire city and some surrounding suburbs (see my post on the greenway here).  So that leaves the biggest category, the Run category - all about the community and running events.  Having lived here nearly 3 years, I'll tell you there isn't a ton.  There are a few running clubs (East Nasty being one of the largest), a few running stores (love you Nashville Running Company), and a surprising small number of races in Nashville proper (that rarely sell out). 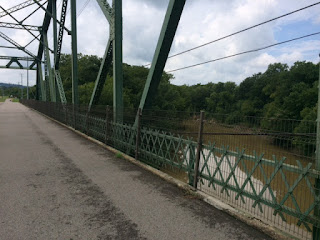 I recently got on BibRave, a site where you can read and leave race reviews.  Not only are there few Nashville races listed, but the reviews left for those races are not written by Nashville residents (with a few exceptions).  I just don't get it.  It's not an easy city to run - it's pretty hilly here (but come on, San Francisco is number 1 and those hills are way bigger).  Nashville is an amazing city that's been getting a lot of publicity.  I just don't understand why the running community is slower to follow. 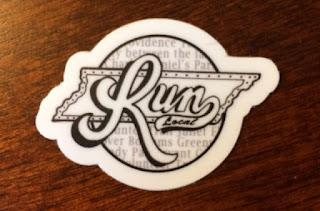 My sincere hope is that things change and change quickly.  I'm going to do my part, reviewing the races that do happen in and around Nashville, writing about great places to run, and supporting my local running stores and clubs.  Let's love running Nashville!

Did your city make the list?
What makes your city a great place to be a runner?

Email ThisBlogThis!Share to TwitterShare to FacebookShare to Pinterest
Labels: Nashville