You Know You're a Runner When

I get lots of emails with running articles, races, things for sale and I have to say that MOST of the time, I don't read them.  I know, shame on me.  Today though, one from Active actually caught my eye - You Know You're a Runner When. You can click on the link and I promise it's short, mostly witty one liners with funny pictures about the crazy things we runners do.  And that got me thinking about that moment we realize we are runners.  For me, there have been a few signs over the years, among them:

1. When I started stockpiling running shoes once I found that "perfect" one.
2. When I started arranging trips to see my family around races (thankfully, they're runners).
3. When friends stopped asking me to do things on Friday nights because Saturday long runs were the priority.  Planning your social life around running is totally normal right?
4. When I actually thought about which medals I would prioritize removing from my house if it was on fire (after I got my animals out of course).
5. When I was injured and experienced major jealousy watching people run on a treadmill at the gym. 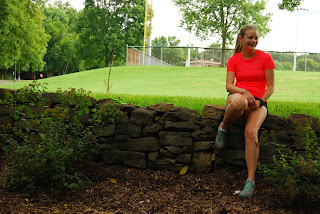 I've sent messages or talked to people I've coached at pivotal moments telling them, "you are officially a runner."  Those reasons are varied (and usually funny):

1. When one person described their injury as "just a little tendinitis" that she was totally able to run through.
2.  When NOTHING is off limits to talk about during a run, including bodily functions.
3. When we have planned the next race while running a race.
4. When they have realized that carb loading isn't REALLY necessary the night before a 5k (but it sure is fun).
5. When the weather no longer dictates their outdoor activities.  Bring it rain!

I guess all of these quirks are why they say running is more of a lifestyle than an activity.  And once you're hooked, there's no looking back!

So when did you realize that you were a runner?
What's the best/weirdest thing about being part of the running tribe?
Posted by Lindsay Loves Running at 4:44 PM