I've never participated in the Great Smoky Mountains Half Marathon (now in its third year) or any of the Vacation Races events before, but this one was a pretty unique (in a really great way) race experience and so I'm going to break this race review up into two sections.  First up: the expo and 5k (inaugural year for this distance).  The 5k took place Friday evening, which meant that I had to drive to Eastern Tennessee late that morning and head to the expo in time to make a 6:30 PM (Eastern Time) start!
The expo is outdoors - the first indication of a super environmentally-conscious event.  It has a small feel, which I love - the half marathon is capped at 2,500 runners - and the host town (Townsend, TN) really supports the race.  Many merchants offer runners discounts and sponsor the event.  There were several vendors at the expo and bib pick-up was super quick and easy.  These guys utilize technology really well to be as paperless as possible and they warn runners to bring their own bags because packets are bag free. 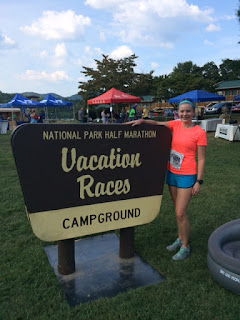 And you're going to want to bring a bag because for being a small race, the merchandise is out of this world!  With registration, you get a cute race shirt and you can opt in for a Hydrapouch (more on this in a minute), but Black Bear Double participants (running both the 5k and the half marathon) get one piece of Black Bear swag - things like shirts, pint glasses, mugs.  That's right folks, one piece and you cannot buy any more!  This swag is exclusive and it is darn cute!  Not to fear, there is so much other really great merchandise to choose from, you won't be too hurt.  I've run a lot of races and my drawers are overflowing with race shirts.  I RARELY buy any merchandise at races, but I walked out with a few really great items (they sold out of posters in a matter of hours). 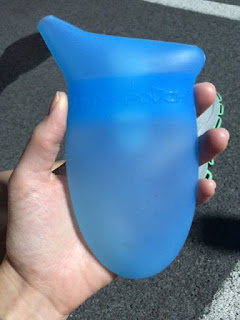 Now let me introduce the Hydrapouch.  Keeping with the environmentally-friendly theme of this event, the races are cup free.  You can carry your own hydration system or you can choose to receive one of these babies.  I had never even heard of this before, but it's pretty neat!  It's made of soft plastic and has a clip on the back so you can clip it to your shorts/belt/etc.  The aid stations were equipped with coolers that had nozzles equipped for these and they were very easy to figure out (though admittedly do slow you down just a touch through the aid station).
This race series is really committed to keeping our national parks clean and the cup free system cuts down on potential trash being left along the roads.  I really liked this system and commend them for the investment they are making (the Hydrapounches were free) to really be eco-friendly.  Admittedly, the first time I tried it, I spilled water all over myself, but I quickly adapted and figured it out!
Okay, on to the 5k.  About 1000 people lined up for this evening run that was quite challenging.  It isn't actually in the national park, but right outside.  First, it was 91 degrees.  Second, the sun was completely beating down on our backs the whole time.  Third, the course was very hilly.  All that being said, it was still a nice race and Vacation Races did a great job organizing it.  It's a point to point, but they have a shuttle system for runners.  They also arranged an honor system wave start. 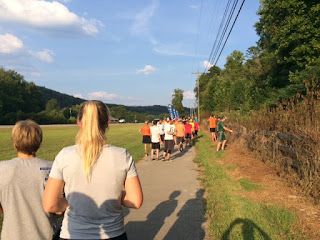 There's no way around it, the race itself was tough and I tried to take it a little easy knowing I was facing a half marathon the following morning.  The only minus points this race gets from me is that the 5k was measured long (which they told us before we started), but its the first year so I will cut them a little slack.  We did have great treats though at the end including chocolate milk and really nice snack boxes.  Snacks are a big deal to me!
Did I mention there was a medal for the 5k?  Did I further mention that it's gorgeous and double sided?  Check out my next post (click HERE) that will cover the half marathon, a review/breakdown of the entire event, and a medal photoshoot!
Posted by Lindsay Loves Running at 6:23 PM