I'm back from California and ready to talk Dumbo!  Over the Labor Day weekend, I participated in the Disneyland Half Marathon Weekend's Dumbo Double Dare (10k Saturday plus the Half Marathon Sunday) - I mean, why run just one race when you can run two?  This is the third time I've run the Half Marathon and the second time I've done the Dumbo challenge and I have to tell you that I love this event, now in its 11th year.  The expo can be a bit of challenge to navigate due to the large crowds (see my tips here), but the races themselves are remarkably manageable logistically.  I feel like the runners here are a bit faster than some of the other runDisney events, but the costumes are pretty unparalleled.  So let's break it down!

Disneyland 10k
Most hotels are walking distance, but Disney also provides a shuttle to take runners to the start line.  After getting through security, there is pre-run water, bag check, entertainment, and plenty of port-o-potties at multiple locations.  I don't like to mess around too much and cut it close getting to my corral, so I got there with some time to spare.
From this picture it is a little difficult to see, but the start line was Aladdin themed!  I love that every year, the theme for the 10k changes and this year it carried through from the start (Aladdin and Genie made appearances on stage) to the medal.  That certainly keeps things fresh for those of us who come back every year! 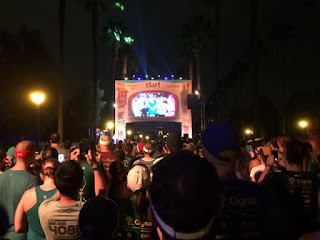 I really like 10k races in general and this is a great course.  Runners travel out onto the surrounding streets (not much entertainment here) and wind their way back toward the parks.  The back half of the race is spent running through Disneyland and California Adventure before hitting Downtown Disney and crossing the finish line.

There were a few character stops in the parks and the requisite Disney mile markers along the way that tons of people turn into photo ops.  I was running solo, so didn't get any great mid-run pics, but I did get one at the end!  This race does have lots of viewing spots for spectators, including this stage at the end set up with stadium-style seating and a screen broadcasting the race.
Disneyland Half Marathon
The Half Marathon starts at the same place and same time as the 10k, which simplifies planning for sure!  I was a little sore this morning after the 10k and a full day on my feet at the parks, so I just decided to cruise and enjoy this one.
There were significantly more start corrals (elite through J) than there have been previously (for both the 10k and the half marathon), which really helped space runners out - very necessary when you're running through the narrow paths of the parks.  The first time I ran this race (2009), it was so crowded that we came to a dead stop and had to walk about a quarter of a mile through Disneyland.

The half marathon starts on Disney property with nearly the first four miles taking you through both theme parks.  There were lots of character appearances here, from Pinocchio to Aurora to Storm Troopers, and there really was something for everyone. 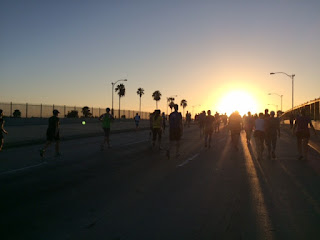 And I have to hand it to Disney, once we got outside the parks, they made sure that we had plenty to look at as we made our way around the streets of Anaheim - hundreds of classic cars, marching bands, hula dancers.  Urban streets and strip malls don't make for the most scenic runs, but there was a good amount of on-course entertainment.  One of the best parts of this race is running around the warning track of Angel Stadium right around miles 9/10 (you also run by the Honda Center, home of the Anaheim Ducks). 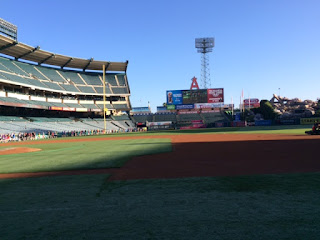 You run through a tunnel up to the field and hear the crowd cheering for you - it's a pretty neat experience.  And once you get out of the stadium, you know you're headed home!  One of the other great points of the race this year was the number of aid stations.  Once you hit mile 9, they increased in frequency, popping up about every mile.  That may seem insignificant sitting here, but let me tell you it can make a big difference! 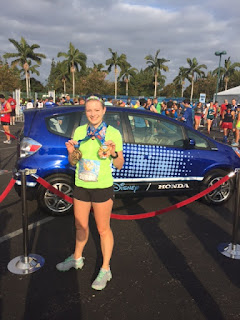 The last mile is behind the parks and then, seemingly before you know it, it's all over!  A high five from Goofy as you cross the finish and then you collect your medals (Half Marathon plus Dumbo Double Dare)!  And the medals are amazing.  RunDisney did an update of the Dumbo medal this year (surprising since it's in its fourth year) and his ears actually wiggle! 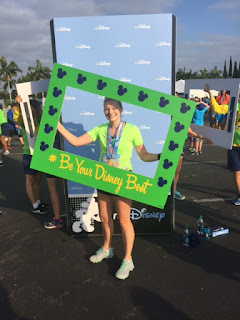 So here's the bottom line:

Run This Race If: you love Disney, want a race "experience," want great swag and medals, like a really entertaining course, want to dress up, and/or can easily get to the California area
Course: Mostly flat, mostly roads, but footing can vary in the parks, half marathon also has a stretch of gravel/sand around Angel Stadium, has staggered start corrals
What Makes it Unique: DISNEYLAND (Walt's creation, classic feel), changing 10k theme every year, bonus medals, Coast to Coast challenge opportunity, very welcoming race even if you're not that fast or experienced
Cost: Pricey, 2016 rates were $120 (10k), $205 (half marathon), $350 (Dumbo Double Dare), $80 (5k), and $20 (kids races) - to me, it's totally worth it for the experience you get
Date and Time: Labor Day Weekend, 5:30 AM starts
Website: http://www.rundisney.com/disneyland-half-marathon/
Would I do It Again? Absolutely! 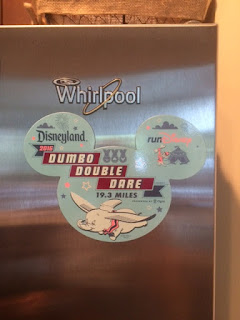