I was on the phone with my mom the other day (she's one bad mother runner, just having completed her second half IRONMAN) talking about her training.  Then she said something that made little warning bells go off in my brain; she said that she took Advil before her long runs.  For some reason, I had a feeling this was bad, but I couldn't tell her exactly why.  So, I did some research to re-educate myself and wanted to share it.  Please note, I am not a doctor and everyone should consult a medical professional before starting or stopping any course of medication. 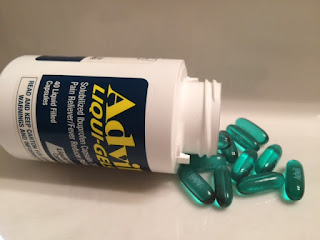 Okay, disclaimers done.  Now, let's cover the two main categories of painkillers one might consider:
So here's the deal - no one wants to be in pain.  Pain is not fun and running is supposed to be fun.  So it would seem to make sense that someone wanting to run better, faster, longer might want to take a painkiller prior to a hard effort.  Bad news is that studies have shown that taking ibuprofen prior to a race doesn't really make the effort seem easier.  In another study, researchers found that athletes who took analgesics (over the counter painkillers) prior to a marathon suffered more pain after the race than those who didn't.

Maybe you're sitting there doubting the research and thinking that popping Advil really does decrease your pain during a run.  Consider some of the potential side effects to taking NSAIDs prior to your run:

No problem, you're thinking, I can swap that out for Tylenol.  While acetomenophen doesn't have the same highly risky side effects as ibuprofen, it isn't entirely safe either.  Take too much and it can cause liver problems, especially if mixed with alcohol.  It's also a common ingredient in cold and allergy medications, so "overdosing" can happen without even realizing it. 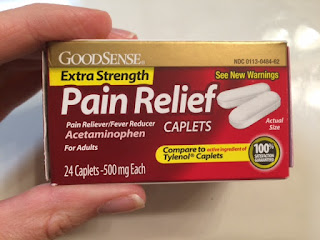 Your safest best is to avoid any painkillers prior to running, and if you need them during or after, to be extremely careful with what you choose and how much you take (and consider any other medications you may already be taking).  Remember, inflammation and soreness is actually your body healing itself.  So be safe out there, listen to your body, and when in doubt give your doctor a ring.
Posted by Lindsay Loves Running at 5:22 PM