Once in a while, you come home to find something magical in your mailbox amidst the bills, credit card applications, and magazines.  Today was one of those days ...

Let's back up.  This Summer runDisney stepped out into new territory ... virtual runs.  For anyone new to it, virtual runs have been the new thing in running.  The appeal is clear - you get the benefits of a race (typically bib download and medal, sometimes additional goodies), without having to actually travel to a race, navigate packet pickup, or contend with crowds.  You can do the race wherever, whenever you want, because almost all of them are on the honor system and give you multiple days to get them done.  The ultimate flexibility and cheaper price tag has catapulted their popularity.

As someone who has been running and doing races a long time, I struggle with the virtual race concept.  I'm old school.  A race to me requires picking up my paper bib from an actual human, laying out my clothes the night before, surrounding myself with other people who showed up for race day, facing whatever weather/course is set out that day, and feeling like I really did something special when I finally cross the finish line in a set amount of time and a medal is placed around my neck by another real human.

The only way I've been able to do virtual races (and I have done a few) is if I set a specific day, hold myself accountable for completing the mileage in one run, and only add the medal to my rack once I've completed the distance (it's even better if you can get friends to do it with you).  That being said, I'm a pretty big runDisney addict, so when they announced their "Virtual Shorts" series, I signed up immediately and without hesitation.

In the Virtual Shorts series, there were three 5ks taking place from May 15-June 30, and themed around Mickey Mouse (Yellow Shoes 5k, Red Pants 5k, White Gloves 5k).  Each race was $39, but if you signed up for the Series (yes please) for $142, you also received a bonus medal and tumbler (no brainer).  A couple friends of mine also signed up, so we planned our run days together to hold ourselves accountable and then waited for our well-deserved medals to roll in.  We waited and waited and waited ...

And then finally, they arrived!  So now that we are all caught up, let's unpack this box of runDisney magic! 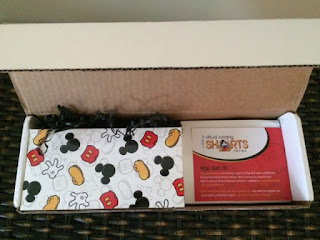 Oh Disney, you do know how to do branding!  I'm in love already! 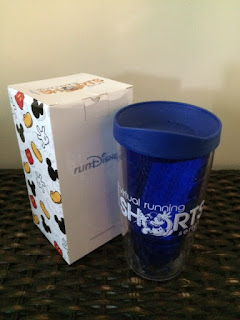 Many people got their Series tumbler before me and there were some issues with breakage.  Mine came fully intact, but I have to imagine that runDisney is going to make things right for anyone who did receive a broken one. 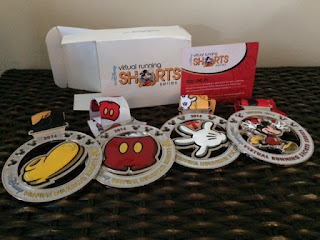 They say good things come in small packages, and in the small box was this medal magic!  The picture doesn't do them justice.  They. Are. Awesome. 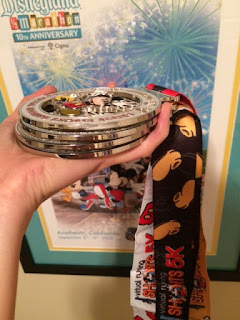 These are not tiny medals, they are good medals and they belong on my wall!  I may have put them all on at once and pretended I was Michael Phelps for a few minutes.  Anyway, to sum up, I think this was a successful first virtual race for runDisney (they took this on in a big, complex way).  If they announce another virtual series, I will absolutely register and try to gather a group.  For now, it's back to training runs for me and looking ahead to the Disneyland Half Marathon Weekend!
Posted by Lindsay Loves Running at 7:51 PM