I have to tell you that running expos are amazing - you find good stuff, silly stuff, unusual stuff - and everyone goes hoping to find the next miracle product/shoe/fuel.  At the last Tinkerbell Half Marathon, a friend of mine announced that when we went to the expo, we had to go to the "Electric Foam Roller" booth.  Now, for anyone new to this sport, foam rolling is one of those things that you know you should do because it works out stiff/sore/tight spots, but really hate doing because it's painful.  I mean who voluntarily wants to inflict pain on themselves?

I have chronically tight achilles tendons - if I don't rub or roll them practically every day, they hurt me so badly for the first few miles of running that I want to cry.  I've ditched high heels, used The Stick, bought multiple Foam Rollers, KT taped myself, but I continue to have this nagging issue.  So I expected nothing from this "electric foam roller," but when I learned it was endorsed by Jeff Galloway (running genius and all around wonderful human being), I agreed to go.
When we got there, we were asked to sit down and try "The BFF," which is a multipurpose tool for massage therapy, moisturization, recovery, and hair removal (yes, it comes with a super fine sandpaper-like pad that painlessly removes hair).  I tried it and liked it, but my friend was in love and had to have it THAT DAY.  With a $300 price tag (though they did offer an expo discount that day), I balked.  The salesman told me that this would fix my achilles issues, but I was still skeptical.  My friend bought it and told me I could test it out while we were in Anaheim.

I used it that entire weekend, and I have to tell you that I really did like it .. . like a lot.  It felt good and, whether it was the BFF or not, I didn't have any achilles troubles during the 10k or half marathon.  I began lusting after this massage miracle, but just couldn't justify spending that kind of money.  After flying back to Nashville, I kicked myself for not buying it at the expo price and set my sights on the Disneyland Half Marathon expo in September, where I was hoping they would be back.

And then another friend of mine said something brilliant, "isn't that basically a car buffer?"  I've never buffed a car, but decided to do a little shopping and check it out.  I went to Wal-Mart and looked at a couple of car buffers to compare specs, and ended up buying one for right around $20. 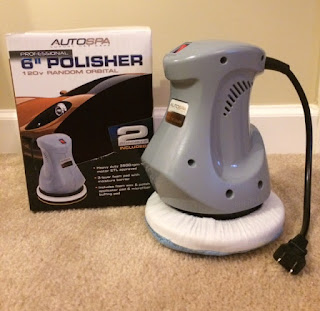 The buffer I purchased has the same pad size (6 inches), same power, same voltage, and a few more rotations per minute (compared to the single speed and the highest setting of the multi-speed).  It does not have a 12 foot cord, pad for moisturization or hair removal, mustache stickers, and is just not as nice looking as the BFF.  I decided to give it a try anyway and I have to tell you that not a day has gone by that I have not used it.  I have no scientific evidence to back up any claims that it has improved my joint/muscle/circulatory health, but I can say that it just feels good and has helped my calves/achilles.  My foam rollers are now sitting neglected and collecting dust. 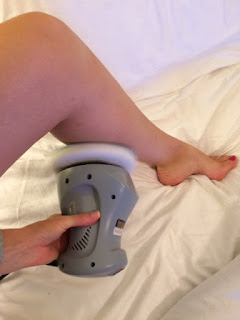 Do I wish I had the BFF?  Well sure!  I mean it comes in hot pink!  I'd use it every day and probably bedazzle it with my initials.  That being said, I cannot justify the price knowing that I can achieve similar (if not identical) results with my little car buffer for a fraction of the price.  I would definitely recommend it - anything that gives me some achilles pain relief is worth it.  If you go to a massage therapist or chiropractor, you may have had a device like this used on you.  This is an affordable, home remedy that is also compact enough for travel.  So get your buff on and get ready for better, happier runs!
Posted by Lindsay Loves Running at 7:59 PM